This is an intervention.

It’s going to be awkward and painful, especially for the interventionee, my husband Neil, who has become a danger to himself and others.  Who has wrought destruction and acute embarrassment and also occasional nausea upon his loved ones.  Who needs to put down his cell phone.  And walk away.  No last-minute pictures.  No farewell texts.  It’s time to go cold turkey.

Some numbers to consider as I build my case:  According to the Pew Research Center,  83% of American adults own cell phones and three-quarters of them (73%) send and receive text messages. The average 18-24 year-old sends or receives more than a hundred text messages daily.  In the 55-64 age bracket, the number is a much lower ten or so.

In the Neil Bracket, the goal here is to get the number down to a nice, round zero.  My children will back me up here.

Our beef with Neil is based on other hard, cold statistics, like the following:

One or more times a week, Neil forgets he is on a group message chain, and sends shall we say inappropriate messages to our perpetually traumatized, gagging, horrified, eye-soap scrubbing offspring.  So far only our family has been targeted, but it’s only a matter of time before the rest of the world is at risk.

It’s been going on for a while.  Neil has been chastised, he’s been warned, he’s been threatened.  There have been apologies, confrontations, ultimatums, tears, vows to go forth and sin no more.  But Neil is a recidivist.  He’s recalcitrant.  He’ll be fine for a few days, what we now know to call the Honeymoon Period, but then I get the textual equivalent of a mumble, something to the effect that he may have sent a text without his glasses again, not sure, and BOOM!  There is this, which cannot be un-seen:

You will notice he tried to bluff his way out of this, which is typical behavior for an intervention candidate.

I actually retrieved this photo off my son’s Twitter feed.  It’s in the #Neilstrikesagain series.

I have not included the texts that refer to specific body parts.  I have spared you that, but you can see them on our children’s Twitter and Instagram feeds.

I don’t mean to pick on just Neil here.  Well, that’s a lie.  I do.  This is an intervention.  But I’m probably guilty of being too old to text too.  I still try get the spelling and punctuation right, and I write in complete paragraphs with strong topic sentences and metaphors, as I was taught.  This kind of effort on my part, with the help of the auto-correct feature and my own lack of appropriate magnifying eyewear,  just results in a sort of word salad, especially after cocktail hour.

Perhaps you are feeling badly for Neil now.  You would like to suggest, in his defense, that he could dictate his texts, rather than typing them.  That doesn’t work in Neil’s case, because he does not proofread.  He can’t.  He doesn’t have his reading glasses.

Take a recent evening when he texted me while enjoying a seafood dinner, and presumably libations, with friends.  The mussels were apparently particularly tender that night, prompting the following dictated message of affection:

In the wrong hands, this could have sparked an International Incident.  This man is clearly dangerous.  Note also the fact that this was, again, a group message.

It is time to face the fact that we are the Jitterbug generation.  The demographic for whom the straightforward flip phones with large, lighted keys were invented.  They can only be used to call 911 and Reverse Mortgage companies.  We can stay out of trouble this way.

Because it’s not just the texts.  It’s the photos.  Neil has discovered the selfie, and he’s obsessed.  I know for a fact, because I have photographic proof, that he goes into his office during the work day, closes and locks the door, takes inappropriate photos of himself and SENDS THEM TO PEOPLE  (more irrefutable numbers here) at the rate of approximately too many times per week. 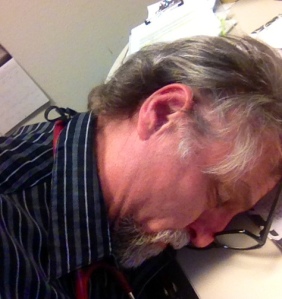 See what I mean?

Like a teenager, he sends pictures of what he is wearing:

Yes, those are mis-matched shoes.  Neil wears them exactly twice yearly.  Neil doesn’t wear his glasses when he dresses either.  But that’s a different intervention.

Neil, you know we love you.  We think you are great dad (other than the inappropriate messages to your children), a great husband, and a good, hard-working provider.

But author Sara Gruen summed it up best when she said:  “Keeping up the appearance of having all your marbles is hard work, but important.”

So, yeah.  We just want you to put down the phone. Maybe take up the saxophone?

Or just get some sleep.