This is a true story.  A ghost story.

It’s a story about a woman aged enough to have an old-fashioned name like Harriet.  Harriet was also old enough to have experienced losses in her life, some significant, some her fault and some not.

She lived alone — sometimes sad — far, far away from the city.  Her old house was a family place, built a century before on a grassy plain under a wide blue sky.

She had several cranky old horses, and a naughty barking dog.  Horses and dog destroyed the garden Harriet planted every year, greedily tearing up carrots and lettuces, trampling and digging, until she wanted to give up on the garden.

She was old enough to know about giving up on things.

But she loved warm, sweet tomatoes in September.  So she did not let the garden die.

Instead she built a fence.  It was crooked, loopy and drunken-looking, but it blocked the garden from those who would do it harm.

She found that she needed a gate.  So she bought an old one from a neighbor.  Rusted, bent and blistered, with a tiny metal plaque affixed to it that said in faded words:  “Black Hills Fence Co.  South Dakota” under a faint buffalo silhouette.

A gate is a point of entry, or it can be an impediment to the same.  So the woman brought home that old gate, bouncing around in the bed of her truck, watching it through the mirror as she bumped over rutted dirt roads.

With some difficulty, she mounted the gate to a wobbly post, smashing her thumb in the process.  No one knew about her smashed thumb, how it throbbed for days.  There was no one to share that information, to cluck over the blackened nail, or roll eyes when she complained about it too much.

The gate hung crookedly — it had been hard to hang by herself — but inexplicably it swung freely.  This pleased and surprised her.

The naughty dog, a small, fat, white terrier, dug a hole under the gate and passed smoothly through it like a chute, in and out of the garden at will.

But the gate kept the horses at bay, and the carrots, lettuces, cucumbers and mostly the tomatoes grew.

There was, Harriet saw immediately,  something strange about the vegetables.  Every morning, she came out to find the soil beneath them cool and damp, though she never watered.  The leaves stretched and grew and budded, and not an insect molested them.

Sometimes, she would spend the afternoon out in the garden, because she felt at peace there.  She would pick a few stray weeds — there weren’t many — and listen to birds.  Though there wasn’t the faintest hint of a breeze, and nothing else moved in the stillness, the gate would rattle itself at her periodically.

Not in a hostile way, Harriet thought.  It was more like a dog shaking itself.  She didn’t understand it, but it soothed her somehow.

One morning Harriet came out to the gate, and she found all the horses’ manure piled neatly in her wheelbarrow, the old pitchfork leaning up against the fence.  She looked around her at the clean pasture, as if trying to see who had told a joke.  The cranky old horses pricked their ears at her, a new friendliness in their eyes.

On another day, harassed by the heat, Harriet approached the gate with her arms full of tree branch trimmings.  She was tired and sad, and thinking of things she regretted, and her loneliness made a kind of hollow sound in her brain.  She didn’t like trimming trees, and the branches scratched now at her eyes and arms.  But she meant to stack them in the back of the garden so the horse wouldn’t get at them, eat them, and grow sick.

She drew a long, tired breath, preparing to drop the branches and open the gate.  But the gate rattled then, and the chain lock fell away.  And then it swung open for her, soundlessly.  Harriett was taken aback.

She was also deeply grateful.

Harriet began to notice other things about the gate.  On days the wind did blow, it coaxed a deep, moaning sound out of the posts, like lowing cattle.  Occasionally it sounded like a piano, warm, honey notes of a saloon ballad that plunked happily into the dust at her feet.

Her naughty barking dog stopped barking, though he was still fat and usually dirty.  Harriet watched him pass back and forth through the hole he’d dug under the gate, and the bottom rail scratched his bristly old back as the dog’s eyes half-closed in bliss.

On winter mornings, wind and rain brought the smell of coffee and bacon through the gate. 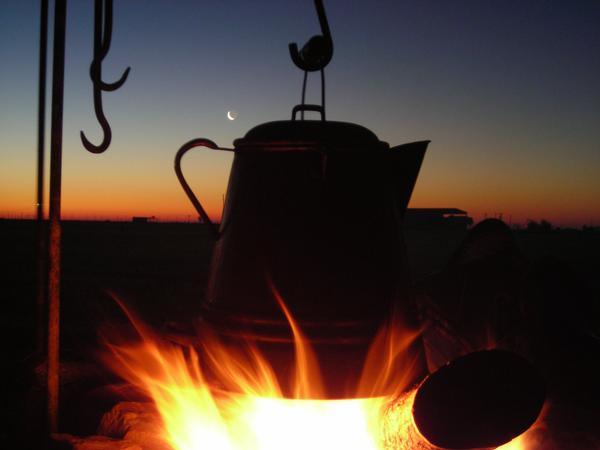 Of a warm summer morning, the faint smell of baking biscuits lingered there.

In the evening, there was woodsmoke and whiskey, spiraling up into the sighing trees.

During thunderstorms or other catastrophic events, the horses gathered around the gate as if for comfort, and wild vetch twined purple flowers around its rusted corners as lavender bunched beneath it.

And Harriet understood that her gate was haunted.  She also knew that all signs pointed to the fact that her ghost was a cowboy.  Not the young, firm-jawed, lean-hipped rodeo variety of cowboy, but rather an older version, with busted-up, poorly-healed bones, sun spots, and eyes the pale blue of soft, faded denim, hidden in wrinkles he’d earned staring past wide horizons.

He was the kind of old cowboy who opened gates for a lonely, tired woman, who kept gardens watered and manure picked up.  He convinced the dog to behave, and comforted horses with gnarled old hands.

She knew that, though her cowboy was a kind ghost, he was not an angel.  She was old enough to know no good cowboy was ever an angel.

And so Harriet came to understand that people who have lived long enough to be sad, without hope of circumstances ever really changing — without a miraculous happy ending — can get through somehow.  They can learn to watch for moments of warmth and consideration.  She understood that not all good things can be seen.

She learned that she was not alone.

As I said, this is a true story.  A ghost story.

10 thoughts on “The Ghost in the Gate”